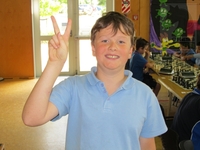 Peter Zhang's Milford Primary were favourites for the event after winning the Nationals last year and coming an incredible 2nd in the Australasian competition, but they did lose some strong players.

The tournament started neck and neck. By Round 2 Parakai Primary, Hillsborough Primary and Milford Primary were sharing the lead with 8 points. Round 3 saw an early break with Milford clearing 1.5 ponts from the rest of the field with Parakai Primary, Kaipara College and Mt. Roskill Grammar sharing 10 points each.

Both Hillsborough Primary  and Riverhead School show some real strength in the later rounds putting 2nd place in contention. Helensville and Parakai faced some tough battles to fall down the leader board.

By Round 6, Kaipara College was on 19 points, only 1 and half points behind Milford Primary. It was still possible to catch them. And most of the Kaipara games would be against Milford contenders in the last round.  Riverhead was keeping a close eye on Kaipara on 18.5 point and Mt. Roskill Grammar was a further point behind on 17.5.

What occurred next in the final round was quite remarkable! Milford put in a massive effort winning all their games. Did Peter Zhang's pep talk do the trick? Or did the stash of Chocolate make the difference?

Hillsborough Primary also put in a huge effort winning all their games. Kaipara faltered in the last moments gaining only 1.5 points from 4. And Riverhead and Mt. Roskill continued their solid form.

The end result? A three-way tie for 2nd place with Kaipara College only missing out by half a point!

In the individual standings the Milford Team players of Willian Zhang and Martin Zhu remained undefeated with perfect scores of 7 from 7 taking joint first place. It should be noted that both of these players are under 10!

Daniel Gong from Hillsborough Primary was the 3rd best player under 10.

Special mention must be made of Daniel Kiernan-James from Riverhead School. Daniel produced an incredible result losing only one game to earn his place of 3rd equal. And with him also in 3rd equal place was Michael Slessor-White also from Milford.

All in all, it was a great tournament. Players' tenacity and patience was truly tested.

The next interschools tournaments for Auckland will be held in late May early June. So dust off those pieces as we head into some cold months and get practising!