X-Chess™ is an awesome chess variant created by Chess Power. X-Chess™ gives many of the pieces extra powers making for an exciting and fast-paced battle.

The Rook, Knight and Bishop all get significant upgrades. The Queen, King and Pawns remain the same as traditional Chess.

The Dragon replaces the rook. The Dragon can move like a traditional rook but it can also move diagonally one square, like a king. 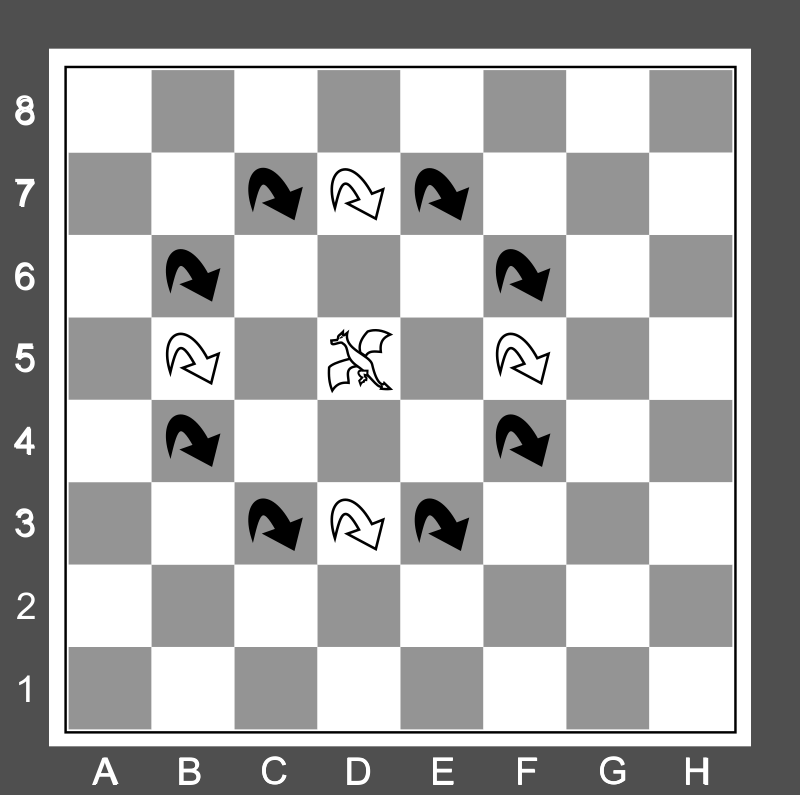 The Minotaur replaces the knight in traditional chess. The Minotaur jumps like a normal knight but can also jump two squares straight in any direction.

The Minotaur can jump over it’s own and it’s opponents pieces in both types of movement. 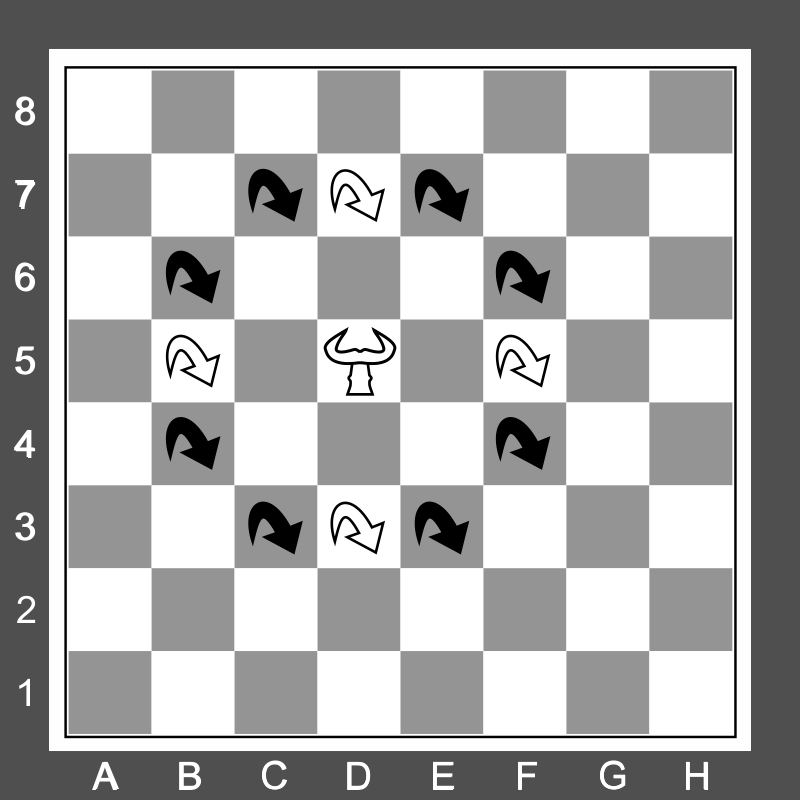 The General replaces the bishop in traditional chess. The General can move diagonally like a bishop and it can also jump like a knight, two squares in one direction and then one square left or right.

When jumping like a knight, the General can jump over it’s own or it’s opponents’ pieces. 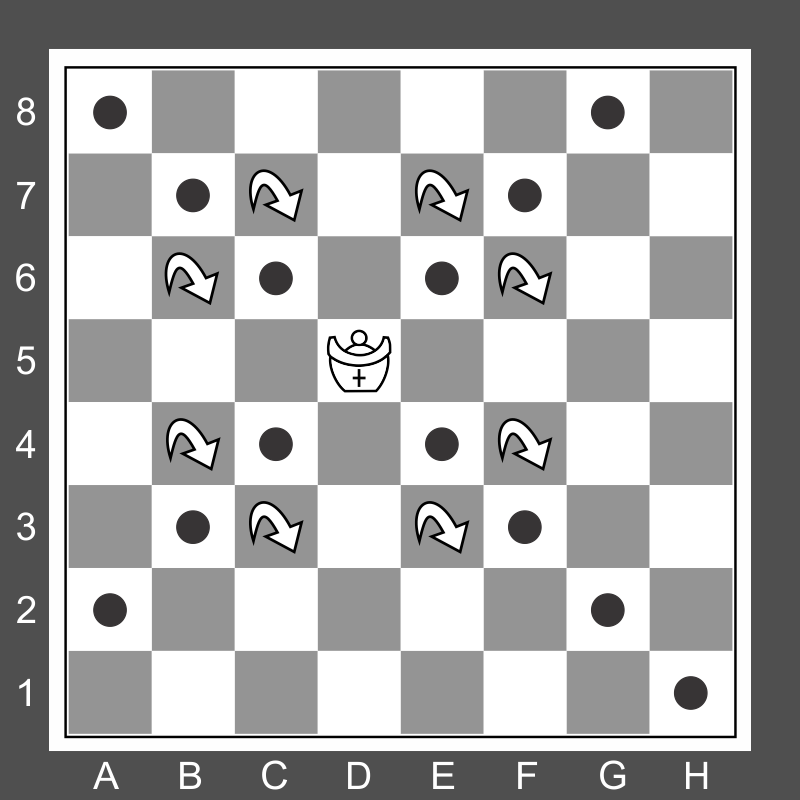 Each player has two Dragons, two Minotaurs, two Generals, one Queen, one King and eight pawns.

Now let's look at an example game so we can see how X-Chess™ is played and how the pieces interact. 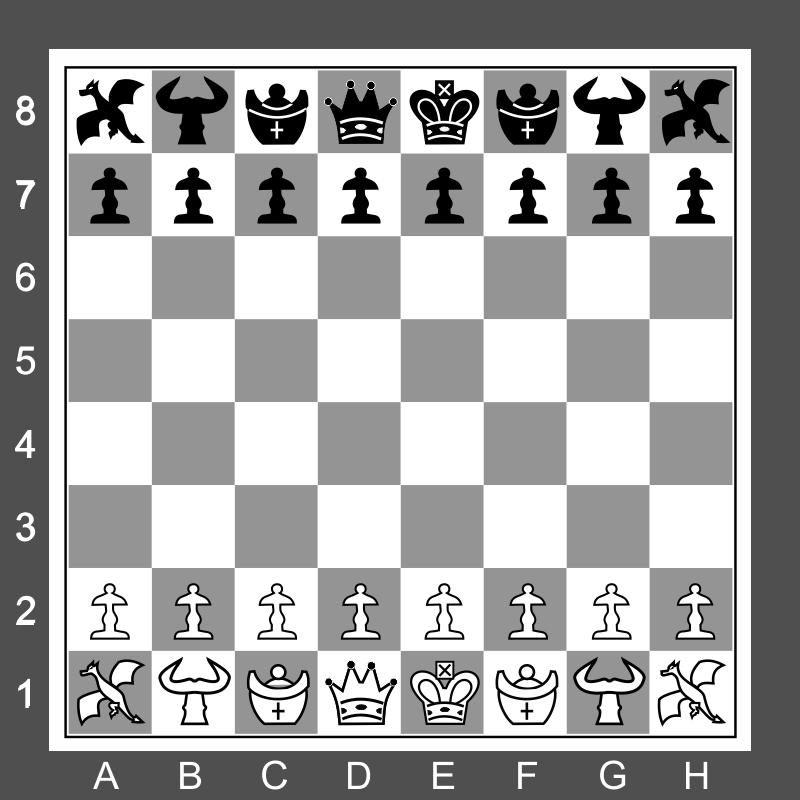 In this example game, we see how you can launch a direct attack on your opponents king in surprising ways.

White and Black start the game by moving out their Generals immediately.

White moves her General from f1 to g3.

And Black replies by moving his General from f8 to e6.
Already an unusual start to the game. 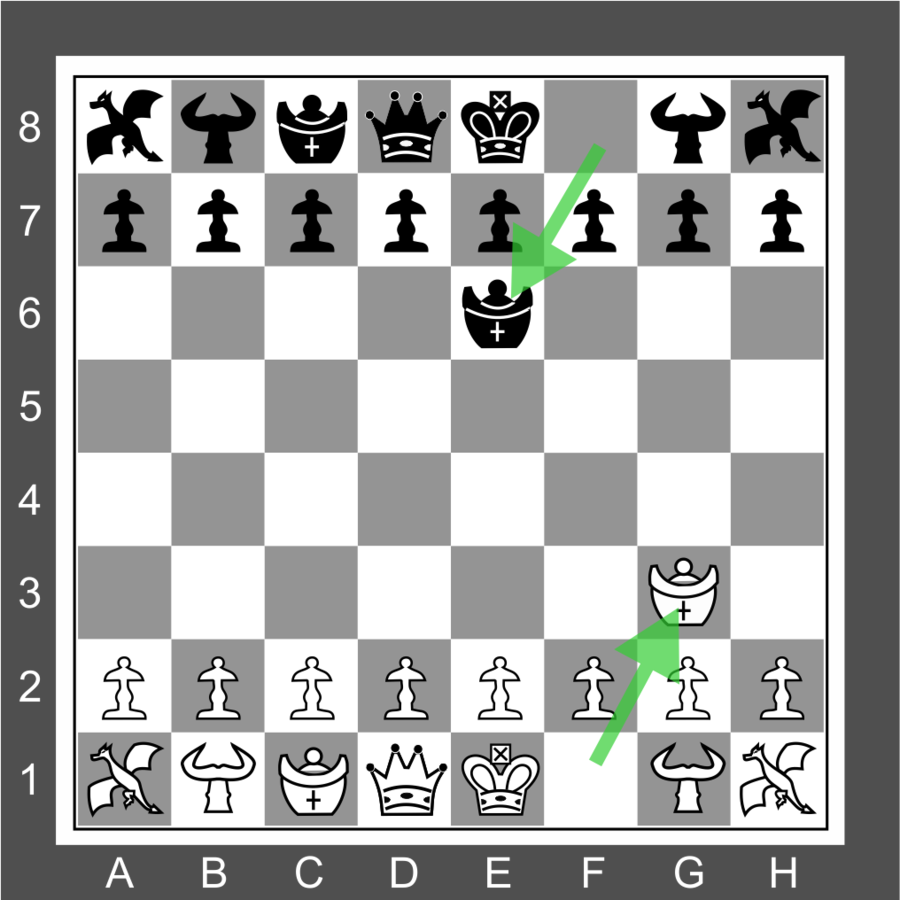 White then makes a classic move you will be familiar with in traditional chess, pawn from e2 to e4 taking control of the centre.

And Black replies by moving out his Minotaur from b8 to c6.

Both players are actively fighting for control of the centre. 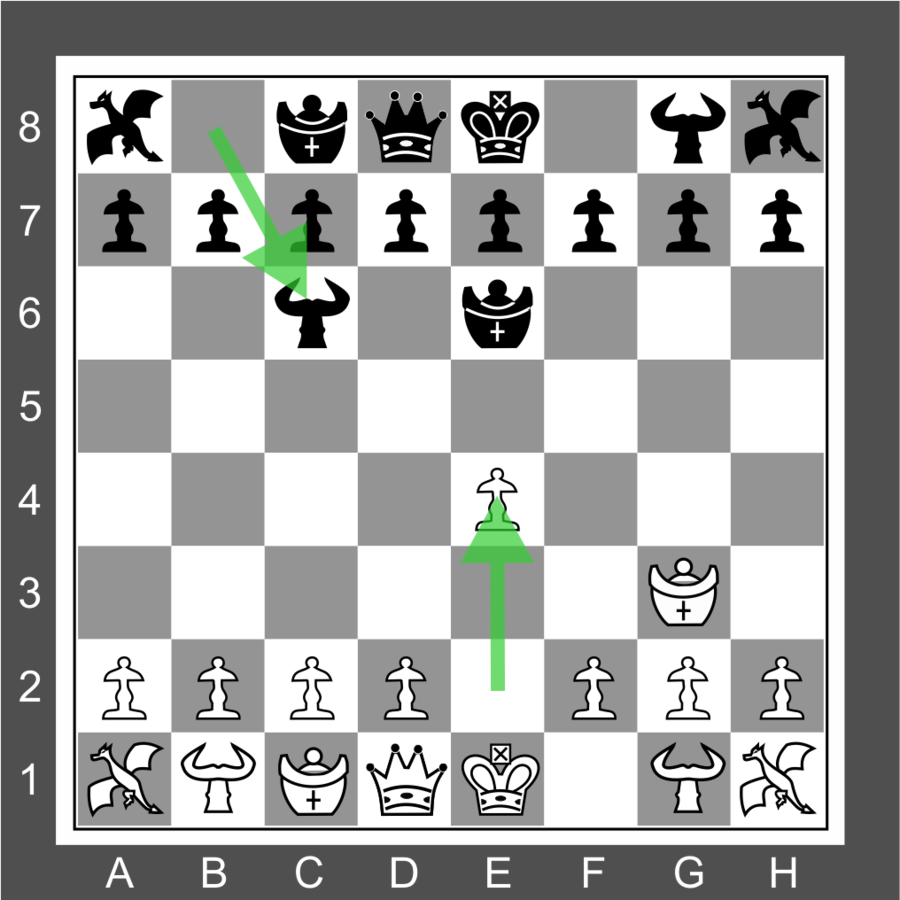 White now brings out another one of her pieces - the Minotaur from b1 to c3.

And Black in reply, plays his Minotaur from g8 to g6, taking advantage of the Minotaur's special movement.

At this stage of the game both players are getting as many pieces out as possible to give them the best chance to fight in the middle-game. 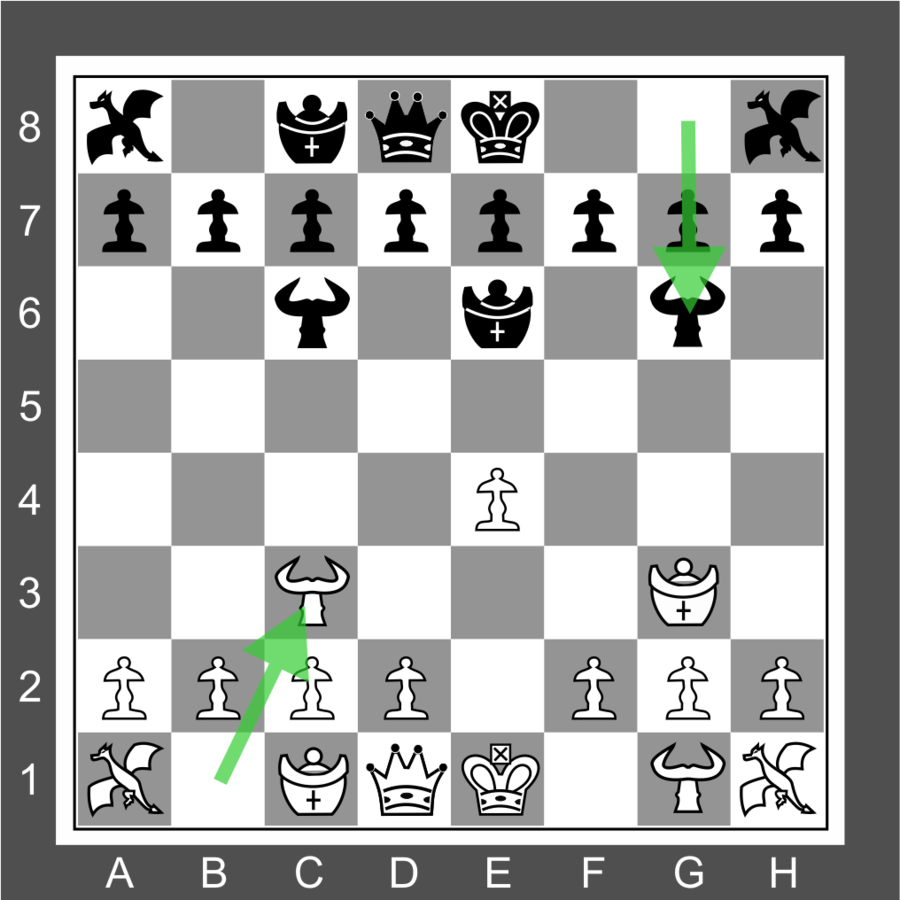 And for Black's reply, he decides to get his king safe by castling kingside.

Now instead of castling herself, White now sees a chance to take full control of the centre and make a pawn wall. She plays her pawn from d2 to d4.

So Black starts thinking about how to keep White's king in the centre. And he finds a nice solution moving his General from e6 to c4.

White is now not allowed to castle because she will be moving through check - note how the General on c4 controls White's f1 square.

Suddenly the game has got interesting! 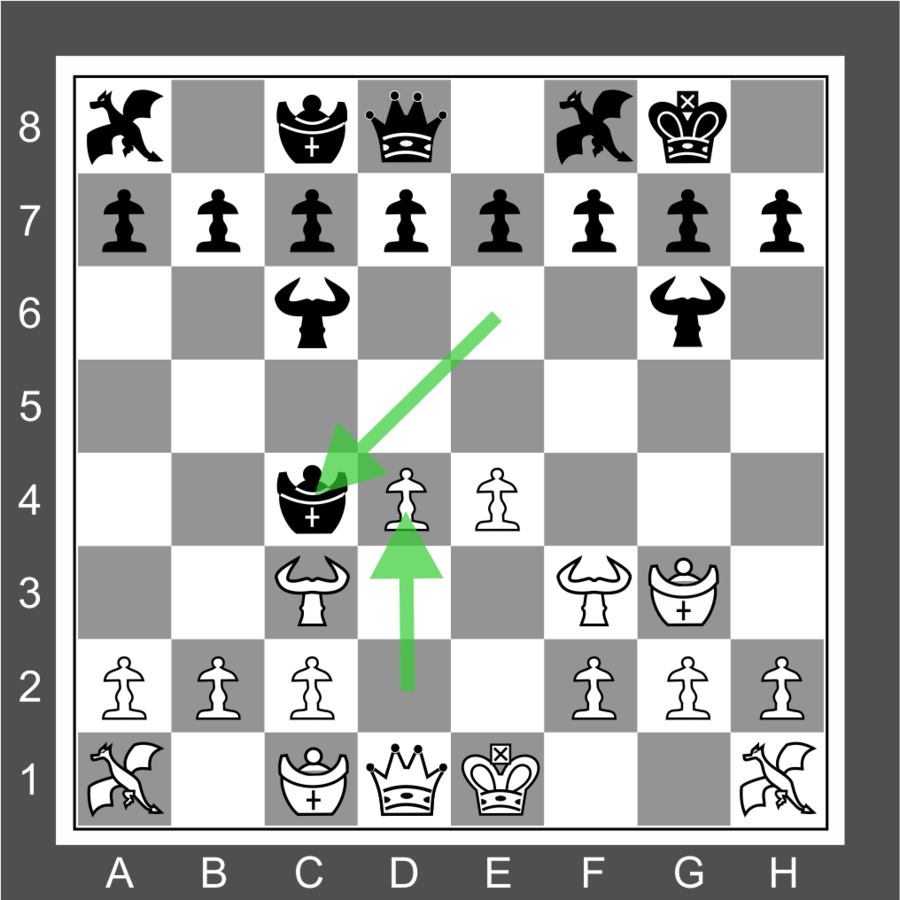 White would really love to castle. So she starts thinking how to chase the General away from it's nice post on c4. White finds a solution, moving her Minotaur from c3 to e3 attacking the General on c4.

Black obviously doesn't want to lose his powerful General, so he retreats his General from c4 to b5. 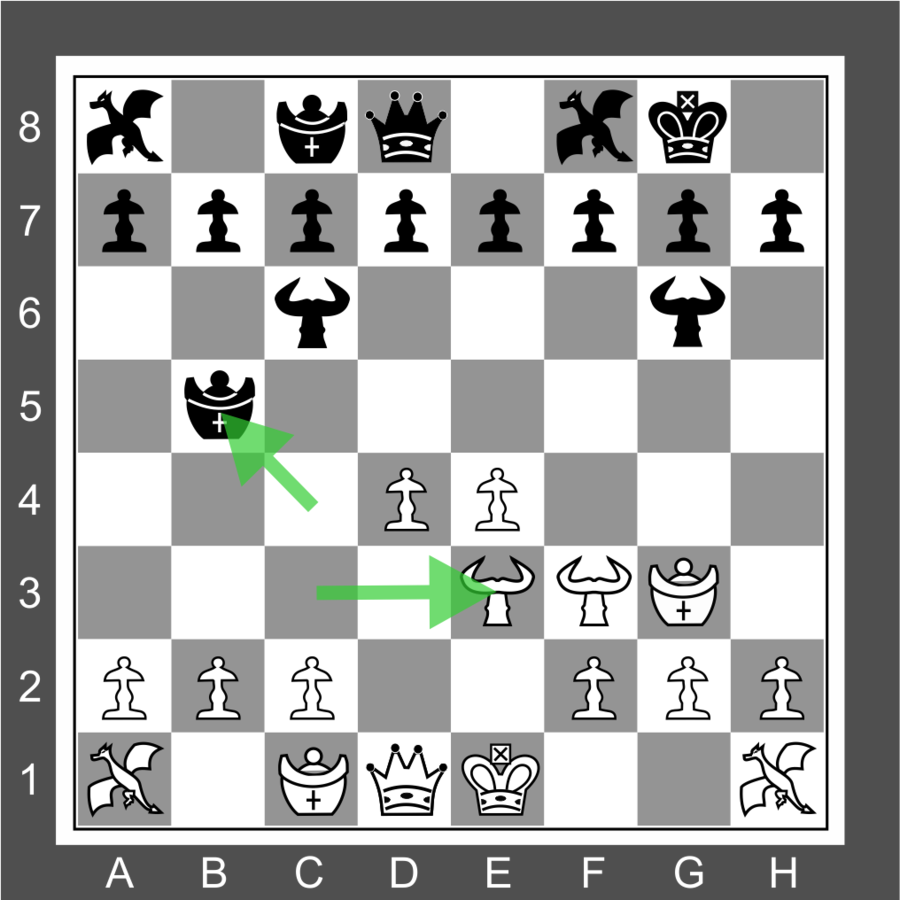 We are now going to witness how powerful X-Chess can be. Instead of developing another piece, White moves her Minotaur from e3 to f5.

Black realises the Minotaur is getting close to his king. He checks that everything is protected. It all looks good so he plays his pawn from e7 to e6 chasing the dangerous Minotaur away.

Can you see White's next amazing move? 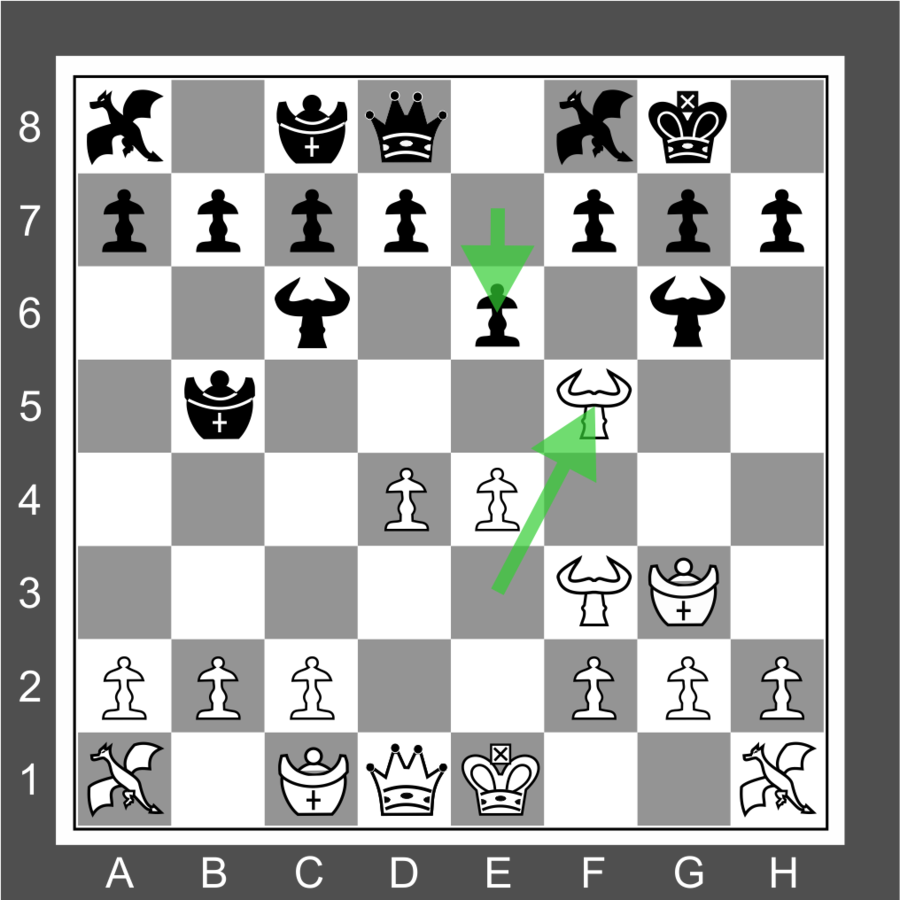 White definitely doesn't want to lose her powerful Minotaur, so it seems she will need to retreat. But instead of retreating, White plays an amazing sacrifice leading to a direct assult of black's king!

White plays her General from c1 to h6 announcing check!

Black has no choice but to accept the offer. The only alternative is to play his King from g8 to h8, but then White has a checkmate in two moves. Can you see it?

Minotaur from f5 to f7, Black's Dragon on f8 has to capture on f7 and then General from h6 to f7, checkmate! 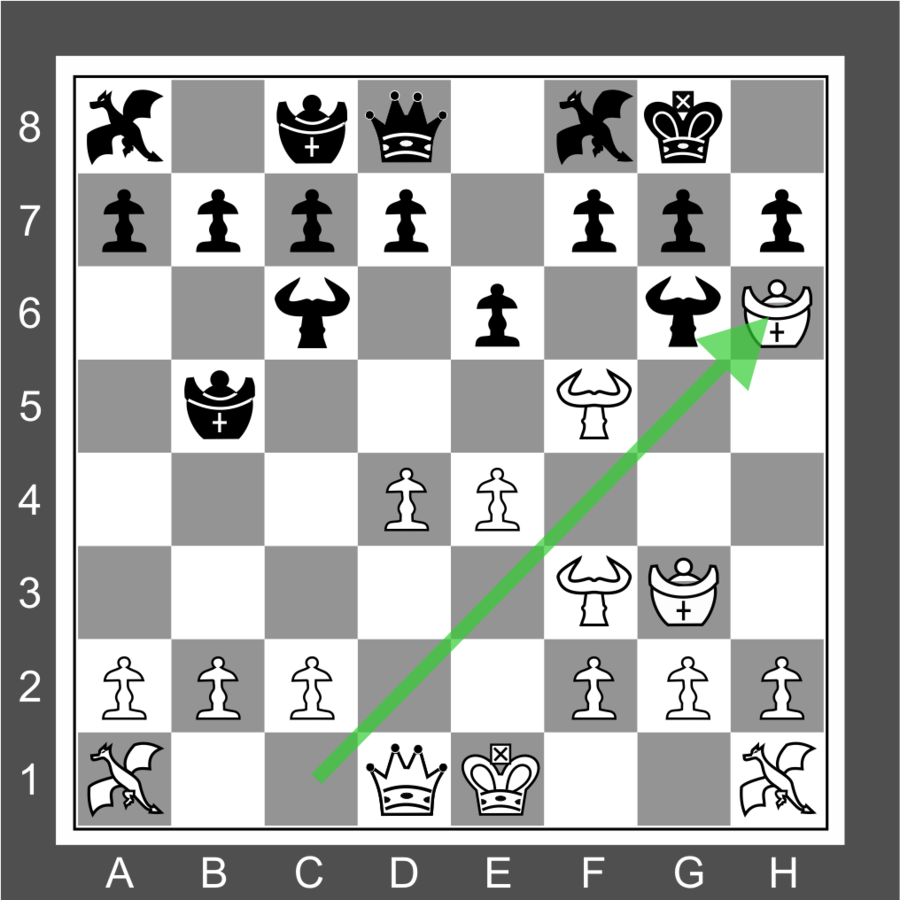 As we learned, Black doesn't have a choice, so he captures the crazy General with his pawn, g7 to h6.

But now Black's pawn structure around his king has been damaged.

Can you see how White will continue the attack? 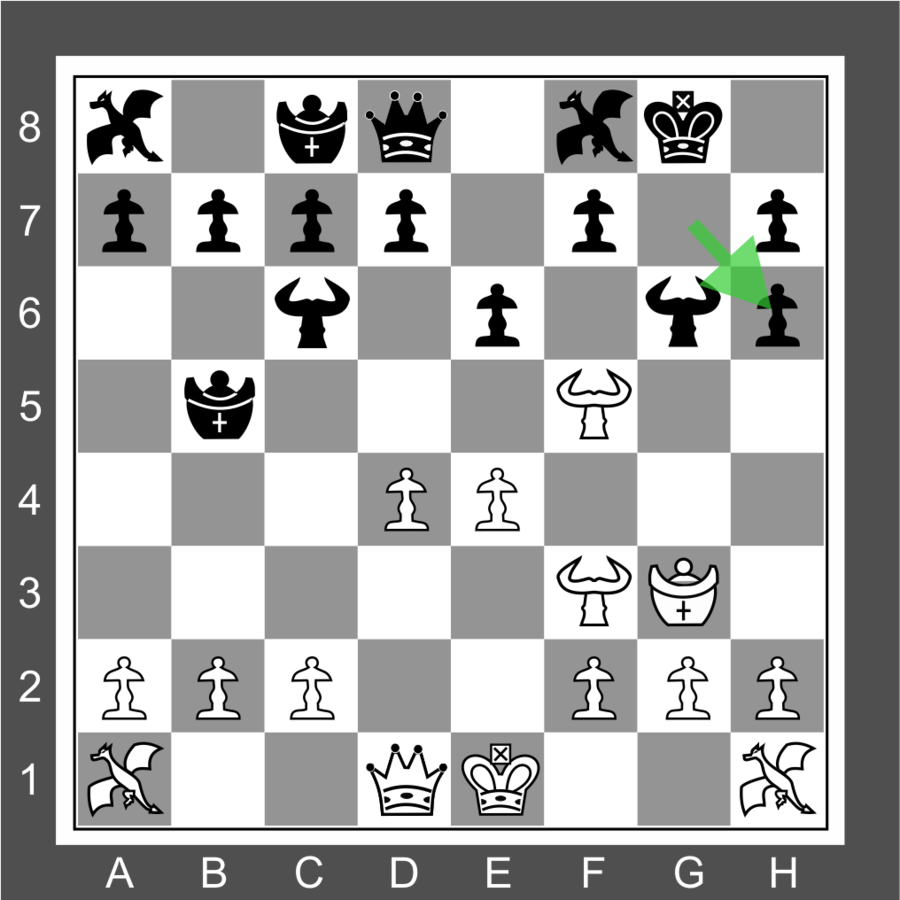 White now brings her Minotaur into h6. Another check! This time black is not even allowed to move to h8 because the Minotaur on h6 is also attacking h8.

So in reply, Black plays his king from g8 to g7.

Can you see white's next powerful attacking move? 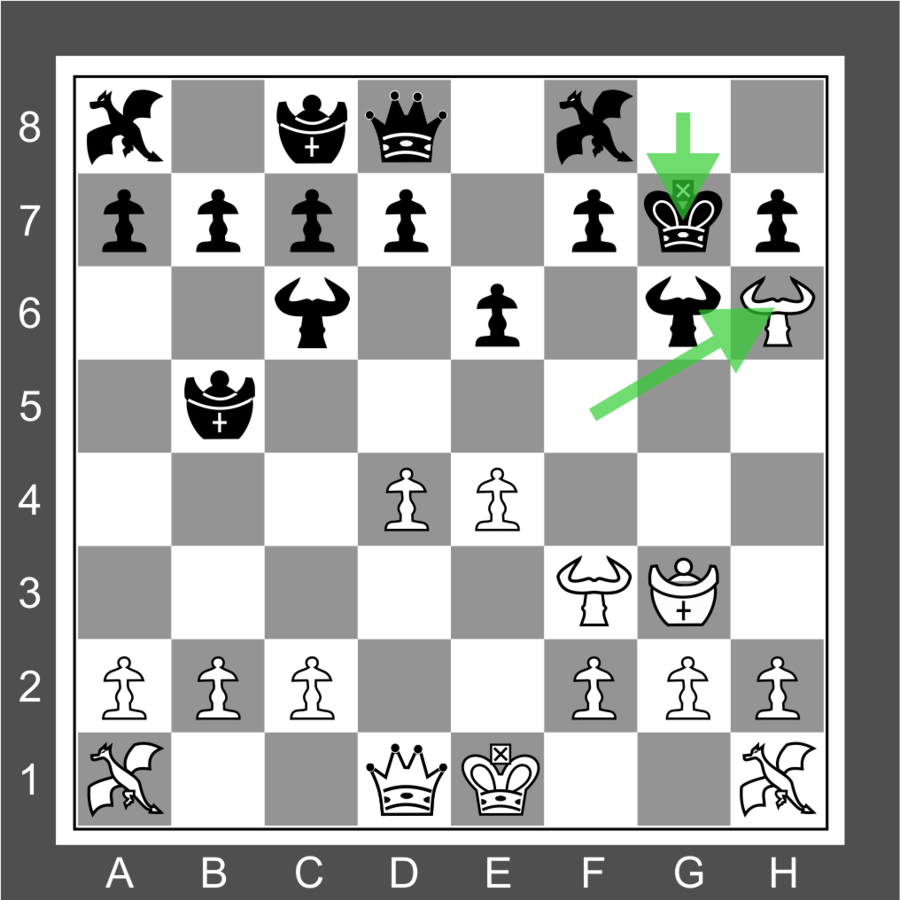 You were probably thinking General to h5 right? But this would allow Black to survive by taking the Minotaur on h6.

Instead White finds another awesome sacrifice and moves her General to f5.

The General protects the Minotaur and Black cannot move his king to f6 either because the Minotaur on h6 covers that square. 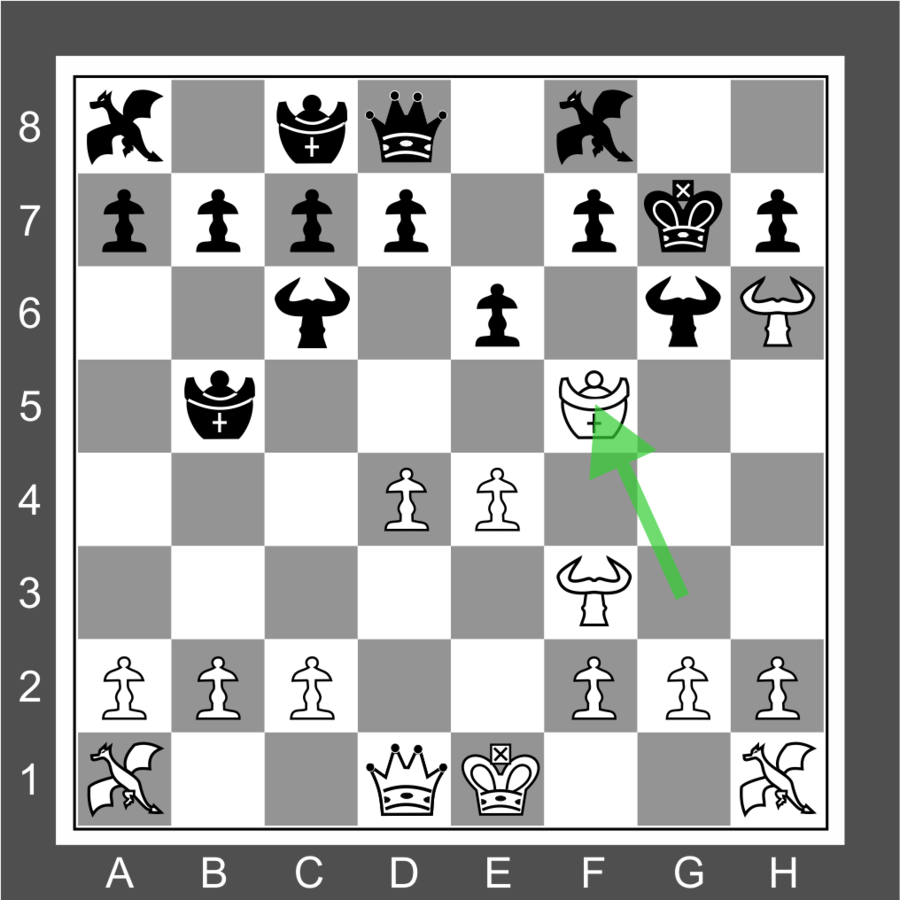 So again Black has no choice - he has to accept the sacrifice and captures the General by moving his pawn from e6 to f5.

Can see the how the game will end? 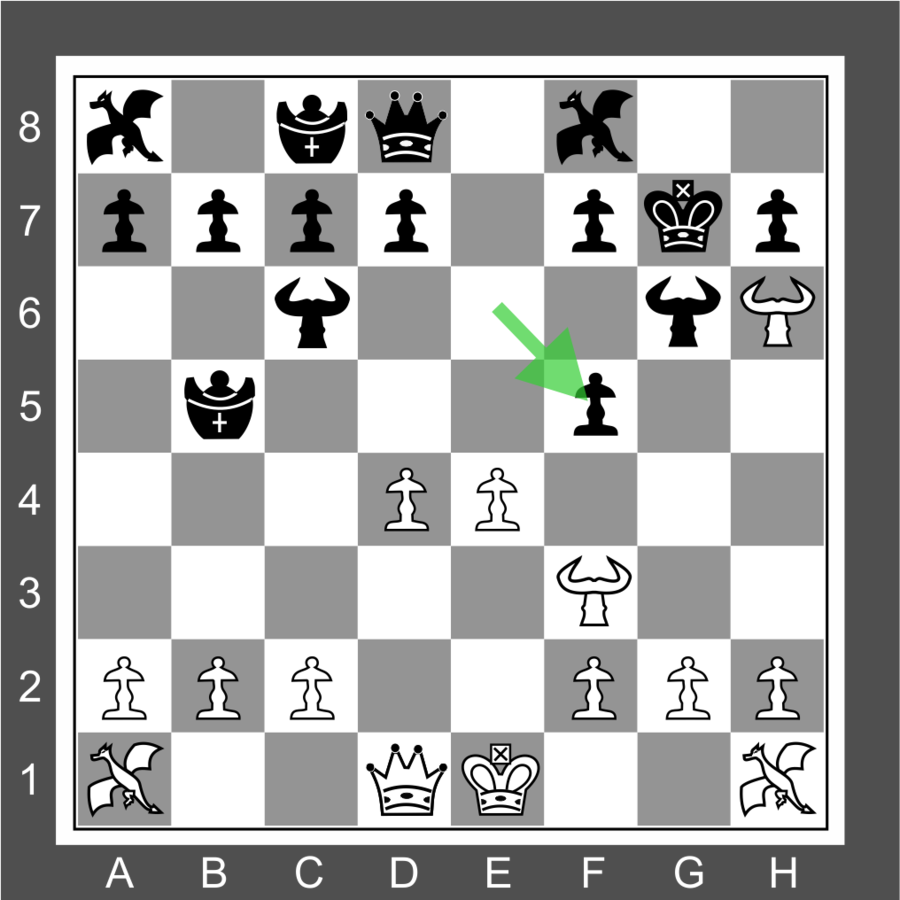 White finishes the game in style by moving her Minotaur from f3 to f5 announcing checkmate!

Note that you have to write Mfxf5 to show which minotaur you mean because the Minotaur on h6 could also have moved to f5.

Check it yourself and you will see how both Minotaurs co-operate together completely covering all of the Black king's escape squares!

This game illustrated firstly how taking control of the centre is an important pre-requisite for attacking your opponents king. It also showed how quickly you can launch an attack and how you can make some really powerful sacrifices to bust open your opponents kingside.

So where did Black go wrong? Well, Black should not have allowed White to get control of the centre. So instead of castling on Black's 4th move, Black could instead have played 4...Md4  and after 5.Mxd4 Gxd4 Black has successfully stopped d2-d4 and exchanged off a pair of Minotaurs.

Here is the full game score... 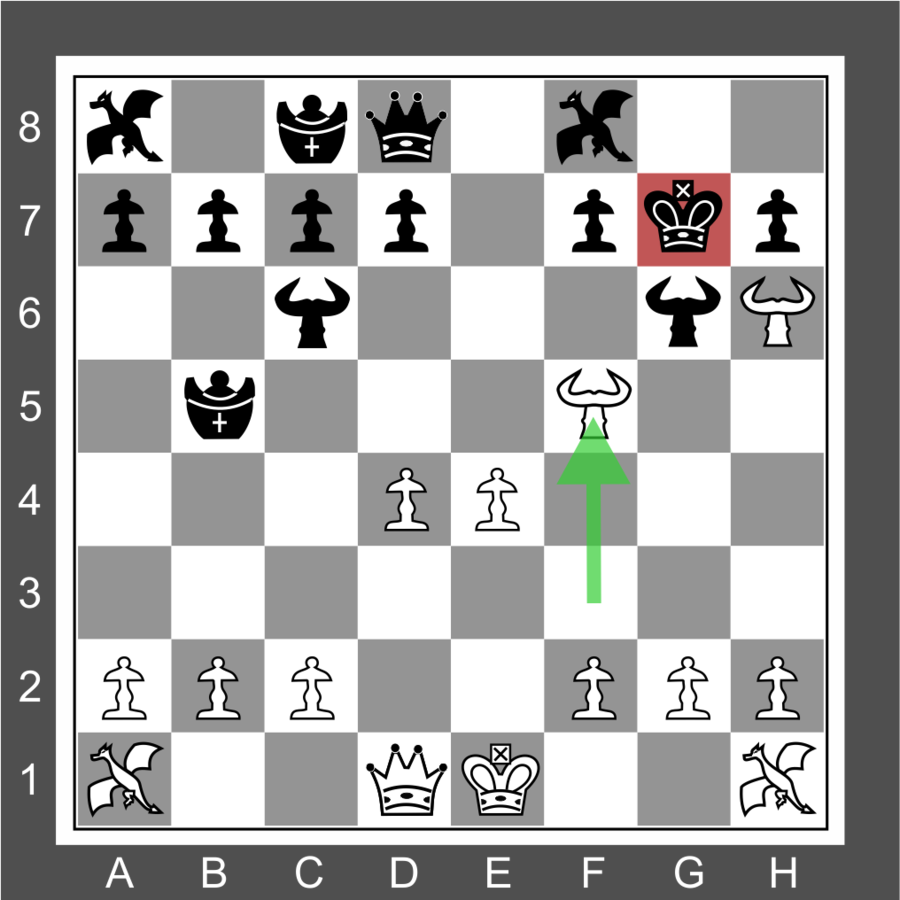 Give X-Chess™ a try. It is a lot of fun to play and you are guaranteed an exciting game. If you have any questions or you would like to send us one of your amazing games, email  x-chess@chesspower.co.nz .

How X-Chess got it's name

X-Chess was named by the Kelso family from Nelson as part of our YouNameIt naming competition. Some of their reasons for naming it X-Chess were:

We totally agree and loved the name they chose and all the reasons behind the name!