Chess got some things right...

Some things in Chess make a lot of sense:

The King and Queen starting next to each other – supporting each other as they would in a monarchy.

Pawns (soldiers) charging forward two spaces on their first move – coming out of the trenches.

Pawns (soldiers) being rewarded for reaching the end of the battlefield with a promotion.

The quantity of each piece is about right too. Lots of solders, two rooks, two knights and two bishops and one queen and one king.

The Staunton design of the pieces describes the pieces well and also shows how each piece moves.

But some things in Chess don't make any sense at all...

If you look at Chess as a battle between two armies, chess logically doesn't make a whole lot of sense for the following reasons:

Two kings alone on the battlefield would never end up as a draw. One king would certainly kill the other especially given they have both wiped out each-others' armies.

In real life a king can of course stand next to another king but in Chess they can't for some reason.

You are rewarded with victory for surrounding the King but for some strange reason you can never capture the king. 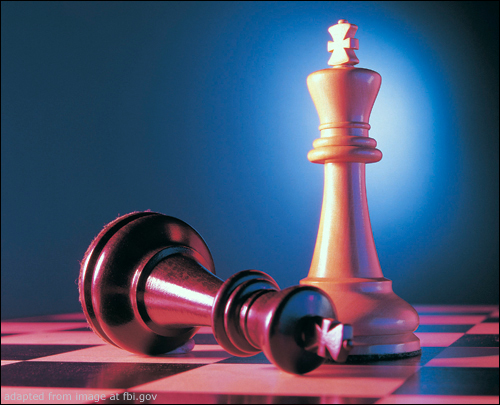 En Passant makes no sense at all. A soldier attacking the space behind another soldier somehow kills the soldier!

Check also doesn't make sense. If a King is under attack, the King may or may not flee. But if the King chooses to stand his ground, why can he not be killed? 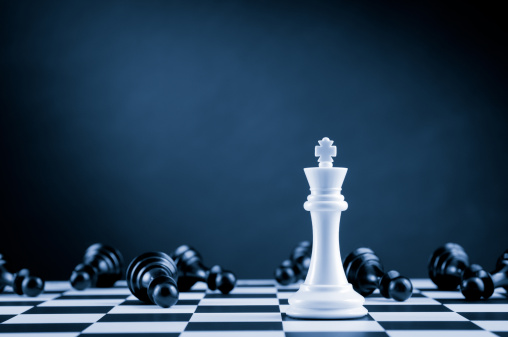 Soldiers are only able to move forward. In a real battle, soldiers can of course retreat if deemed necessary or move sideways out of the way. 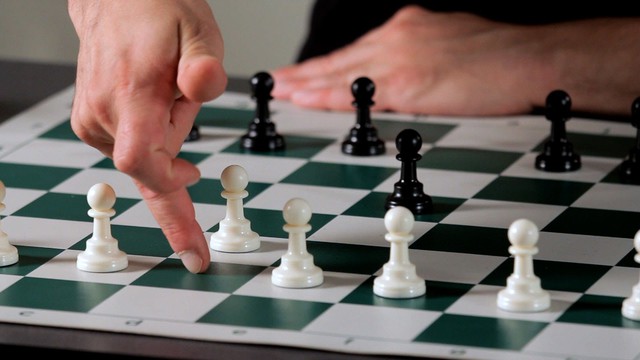 Our experience in teaching thousands of children Chess is that it isn't natural to learn some aspects of the game:

Kids generally want to take the king if they can.

Kids don't understand why a King cannot be next to another king.

Castling and En Passant are unnatural to them. En Passant is particularly confusing for kids and extremely hard to learn.

Kids need to be taught that pawns capture diagonally but move forward – this doesn't make sense to them at first. 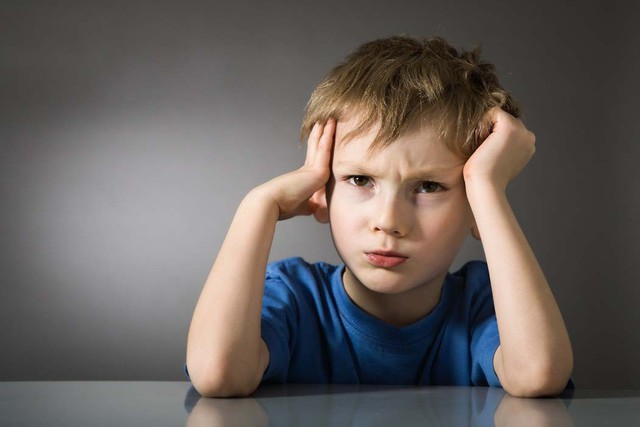 Caïssa (pronounced "kah EE suh") takes the things that make sense in Chess and throws away everything that doesn't. Every aspect of Caïssa aligns with how things would more likely unfold on a real battlefield. Caïssa is named after the Goddess of Chess.

Caïssa is played with normal Chess pieces. You can use a normal Chess board or a Caïssa Board. The benefit of a Caïssa Board is spectators know you are playing Caïssa. Of course it would be fun not telling them, and see their faces when you make impossible moves ;-) 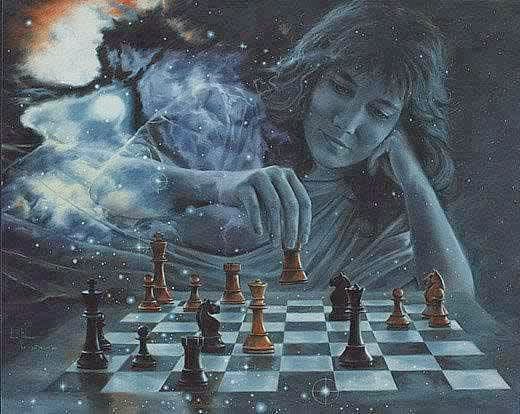 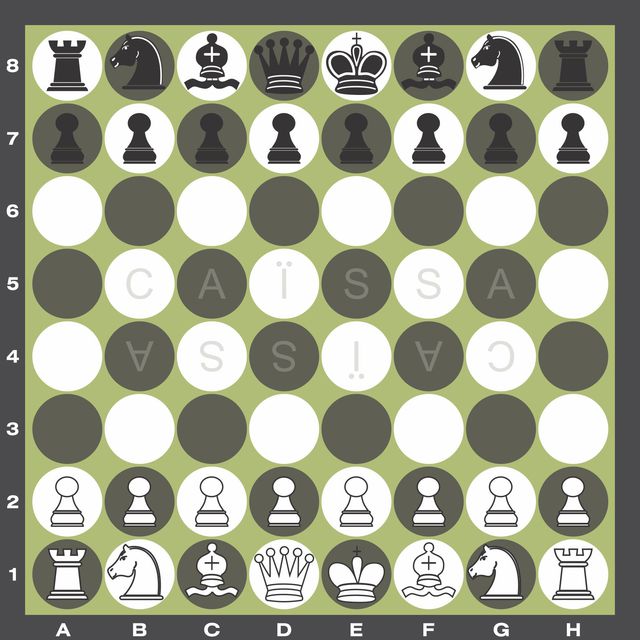 The Rules of Caïssa

Here are all the similarities and differences between Caïssa and Chess.

All pieces in Caïssa capture the same way as they move without exception.

All pieces start in the same positions as they do in Chess.

Caïssa is won when a player captures all his opponents pieces or the King is captured. A player who loses all his army and only has a King remaining loses immediately.

Interesting Fact: A piece that moves this way is known as an Amazon in Fairy Chess. An Amazon was witnessed in Russia way back in 1772 in place of the Queen.

Check doesn't exist. The King can move into danger and can be captured by an enemy piece just as a King would. There is no such thing as Check. The King simply is in danger or it isn't. If a player chooses to put their King in the line of fire of their opponents piece or fails to move their king out of danger, the other player can simply capture their King and win the game if they wish.

Stalemate doesn't exist. If the King is forced to move to a square where it is under attack, it is simply captured.

Pawns can move two spaces on their first move just as in Chess. Rushing out of the trenches. Like Chess, pawns cannot capture when moving two steps forward on their first move. The logic for this is a pawn is busy rushing out of the trenches so cannot attack in the midst of this. The reason we haven't allowed the capture is our game testing showed if we allowed the pawns to capture, they would obtain too much power.

Pawns promote as they do in traditional Chess.

There are two ways to win in Caïssa: Capture the King or capture all your opponents pieces.

Draws are still possible through an agreed draw, 50-move rule (no pawn moves or captures for 50 moves), 3rd repetition. There is no perpetual check, stalemate or insufficient material draws in Caïssa.

Caïssa is a lot of fun! A whole bunch of new possibilities make the game challenging, exciting and more dynamic than Chess.

The Kings superior power is tempered by the fact the king cannot put its own life in danger without severe consequences.

The increased power of the pawns means your opponent cannot rush attack you without repercussions.

The ability to move pawns sideways brings some wonderful new ideas such as improving your pawn structure or opening new lines of attack.

Attacking the king needs to be a well supported attack – otherwise the King can just capture its attackers. So just like Chess, you need to plan your attacks well to be successful.

The centre is a frenetic battleground early in the game. Just as in Chess, the player that wins the centre has the advantage. And the King has influence over the game from the start as a King should.

Strategically many of the ideas that prove successful in Chess can be applied to Caïssa. However, because of all the new possibilities, creativity and originality is highly rewarded. 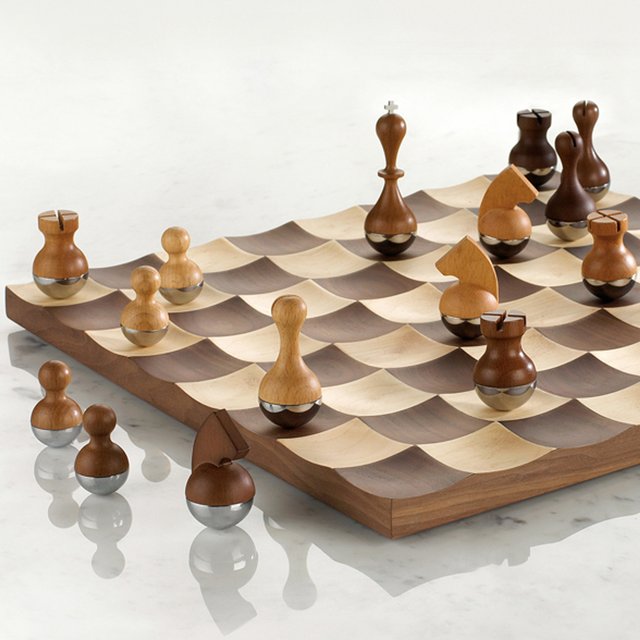 What is the intent of inventing Caïssa?

Our intent is simply to create a game that is fun, challenging and based on our extensive experience of teaching kids chess, extremely easy to learn. In this respect Caïssa has all the upsides of chess with few of the downsides. You can explain Caïssa to kids in a real world way and they will get it. You can explain the characters and why they move the way they do. And it all makes sense.

And when they play their first game, you won't have to say "Sorry you can't do that". Because Caïssa will come completely naturally to them. For a chess coach, Caïssa is a dream come true because it can lead kids into Chess through natural progression rather than negative enforcement.

One of the wonderful things about chess is it has a very long history and so the game has been tested extremely thoroughly. Caïssa can't claim anywhere near this level of rigour. So we just don't know if the game has the richness that chess has. Our initial impressions is it seems to be more tactical but still retains strategical themes. Time will tell. Caïssa's popularity will predominantly be a function of how much fun it is to play and how interesting the game is.

So give it a try. We are confident you will have a great experience!