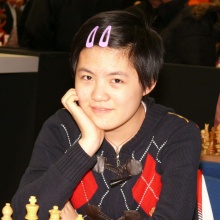 Hou Yifan (born February 27, 1994, in Xinghua, Taizhou, Jiangsu, China) is a Chinese chess prodigy. She is the current Women's World Chess Champion, the youngest ever, and the youngest ever female player to qualify for the title of Grandmaster.

At the age of 12, she became the youngest ever player to participate at the FIDE Women's World Championship (Yekaterinburg 2006) and at the Chess Olympiad (Torino 2006).

In June 2007, she became China's youngest ever National Women's Champion. She achieved the titles of Woman FIDE Master in January 2004, Woman Grandmaster in January 2007, International Master in September 2008, for reaching the final of the Women's World Championship. In 2010, she became the youngest World Chess Champion in history (men's or women's) by winning the Women's World Championship in Hatay, Turkey at the age of 16.

In the most recent (March 2011) FIDE rating list, she is ranked as the No.1 girl player in the world, the No. 3 female player, the No. 14 junior player, and the No. 3 player of either sex born in 1994 or later. She is only the third female chess player to achieve a FIDE rating of more than 2600.

In January 2011, Hou Yifan was recognized as the best Sportsperson of the Year in China involved in a sport that is not included in the Olympic category.