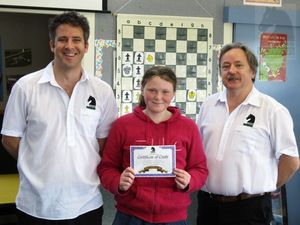 Our very own Chess Power team took on Matapu School head to head and managed to take the win by half a point on the final round!

Chess Coach Bruce Pollard played a queen down and Chess Power CEO played a Queen and Two rooks down. If this wasn't hard enough, the Chess Power team only had two players whilst Matapu had four players contributing to the team score each round.