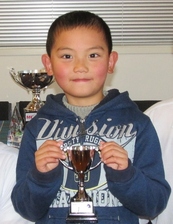 With a record 5 Adults competing, this MC Cup was all about separating the men from the boys - oh and two girls.

This tournament was marked with plenty of upsets. The mystery 2000+ rated player was none other than Chess Powers' Paul Macdonald! His first MC Cup event and it wasn't smooth sailing.

In the Under 14 Division, Nicholas Quek came 1st with 4.5. A great result for his first MC Cup. Kumaa Jayachanthiran came 2nd with 4.0 and Gareth Fairholme's persistance paid off coming in a whisker ahead of Michael McKenzie on Tie-Break with 3.5 points.

The best girl was Crystal Zhu who won a Chess Set.

The winning score for the knights tour was Gian Kraur with only 4 pawns remaining. We hope you enjoy your new Chess Set Gian!

The Spot Prize went to young Kyle Maxwell who won himself a brand new DGT Chess Clock! I am not sure he knows how lucky he is but I imagine he is already loving his new toy.

From the team at Chess Power, a special thank you to all the participants and parents for your continued support. Thank you to the many new-comers who travelled to attend the event for the first time.

And a special thank you to Dads Wayne McDougall, Cristo Umanzor, Werner Krauer and Alan Quek for participating. The kids absolutely love playing with the adults and sometimes even winning

We hope to see you at the next event and help make it even more successful!