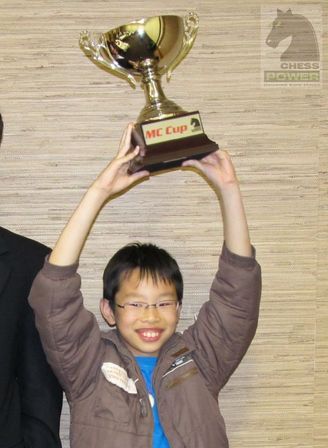 The MC Cup Finals is an invitation only event made up of the qualifiers of MC Cup Qualifier tournaments throughout the year. Essentially it is a selection of the strongest chess players for their age all competing for the MC Cup Trophy.

The winner of the tournament earns the title of MC Cup Champion 2011. The win the MC Cup for a year with their name being engraved in the trophy. They also gain free entry into all MC Cup events for the following year and win a $300 cash contribution to the Queenstown Classic.

We were expecting 10 players to this event.William Zhang, Alphaeus Ang, Daniel Gong, Johnson Chen, Michael McKenzie, Allen Fan, Leo Zhang, Derek Zhang and the two Chess Power invitational players, Kumaa Jayachanthiran and Rohan Patel. After the first round we had a late entry with Rodney Li, the October winner joining the tournament which meant after Round 2 there would be a bye each round.

It is hard to say who would be a favourite to win as many players were of very similar strength.

The tournament was a 7 round swiss with a time control of 25 minutes and a bonus time of 5 seconds a move.

The event was held on Sunday 11 December at the Lincoln Green Conference Centre, Henderson. The venue was outstanding, comfortable and very quiet apart from the odd lost tourist ;-) Our first event with white table cloths! And not a whisper when games were in progress allowing players to completely focus on their games.

Our official video of the event 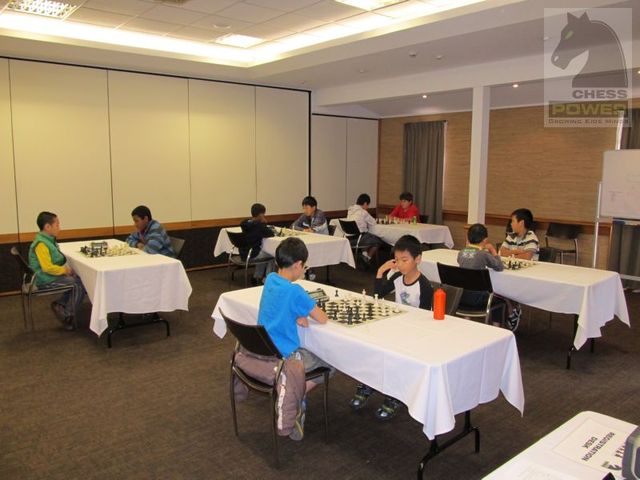 Here are a selection of photos of each of the players hard at work. 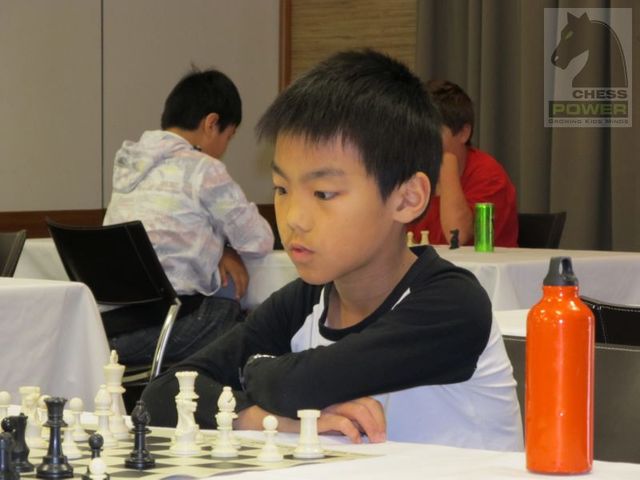 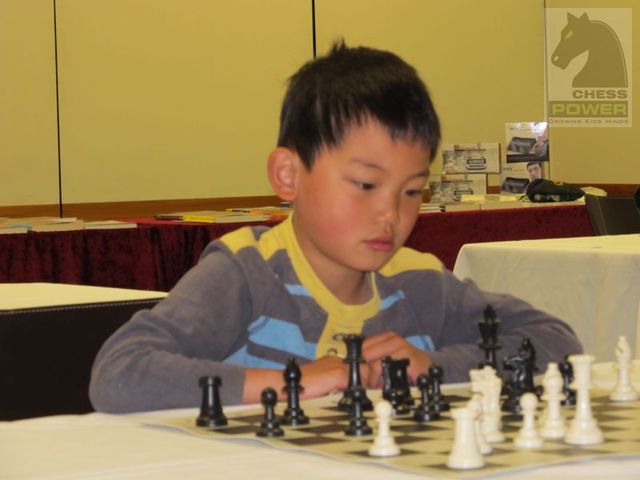 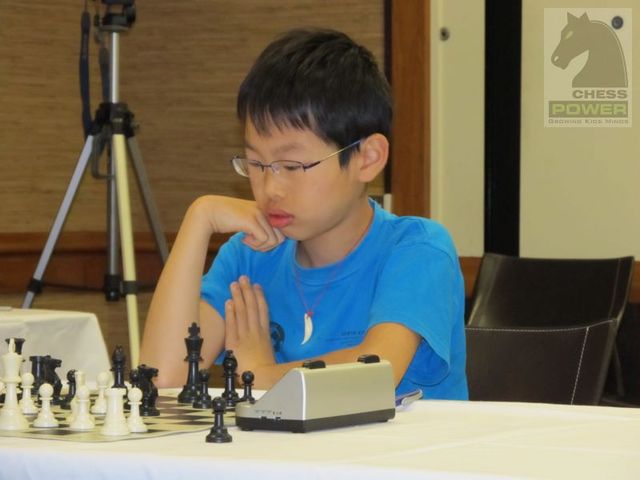 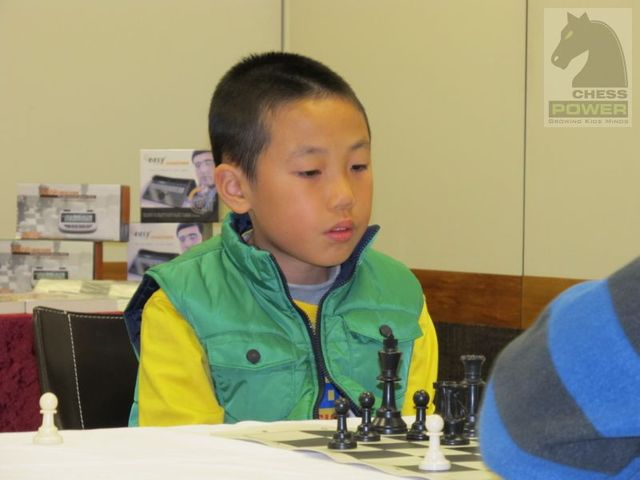 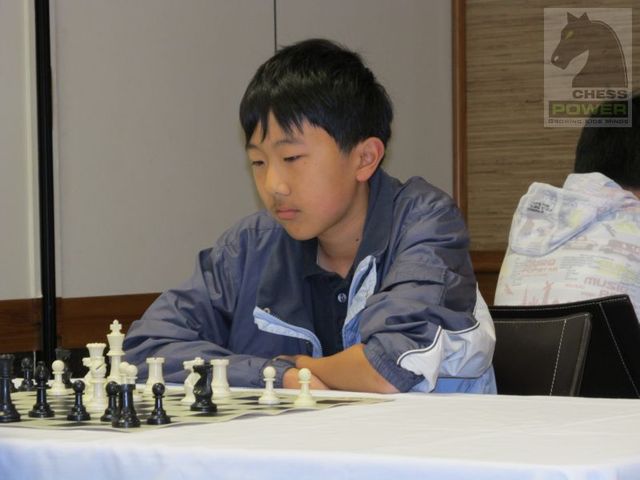 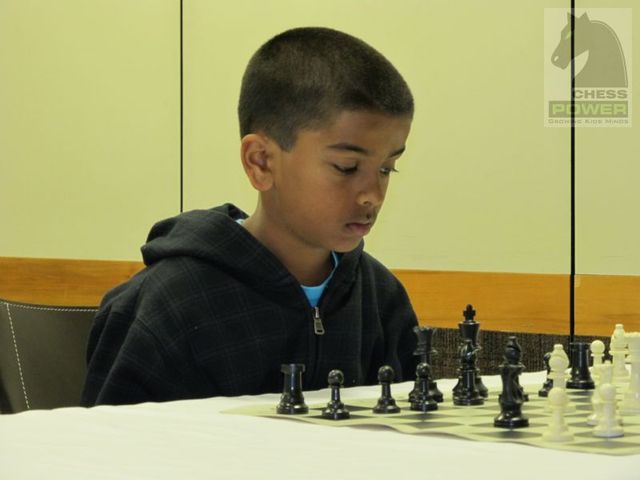 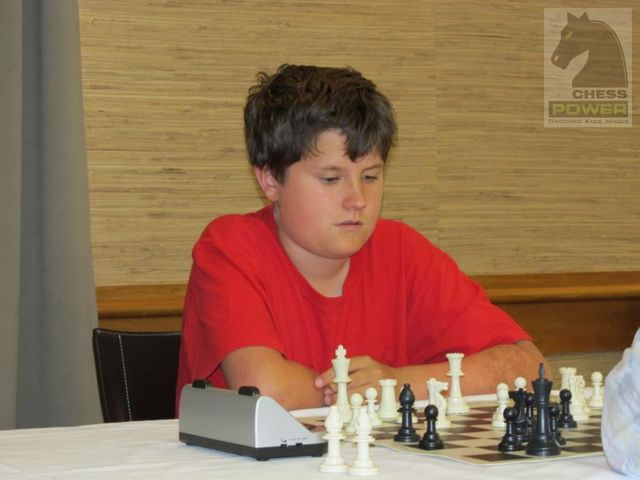 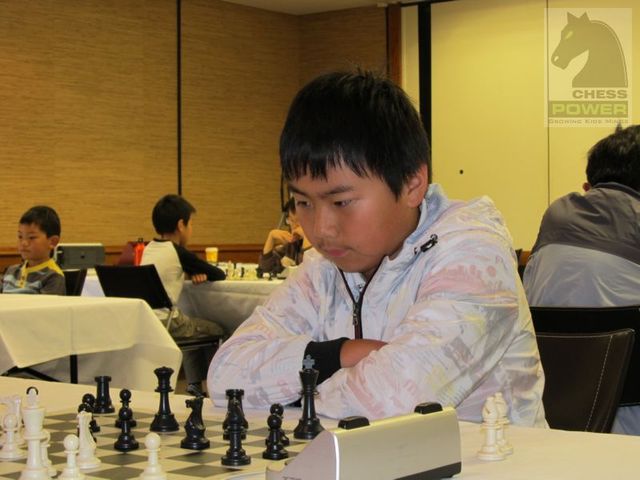 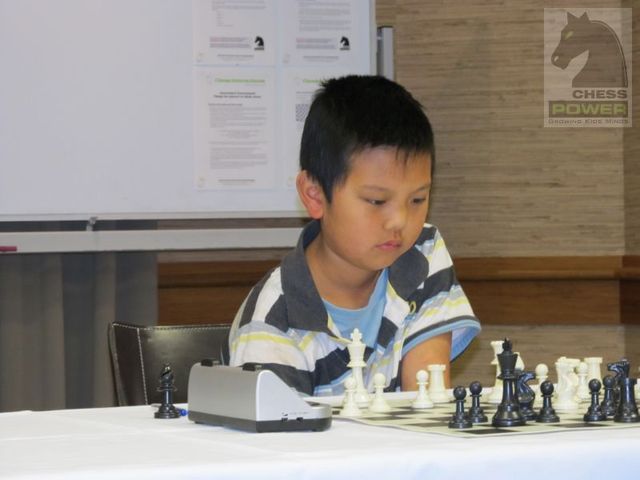 Round 1 matched Leo Zhang with Allen Fan. After a tough match with both players trying their best to secure a win, the game petered out into a draw. All the other games went as expected.

In Round 2 Derek Zhang held William Zhang to a draw. Johnson Chen overcame Alphaeus Ang. This was a big upset considering the position Alphaeus was in. But looking at the clock tells a different story. 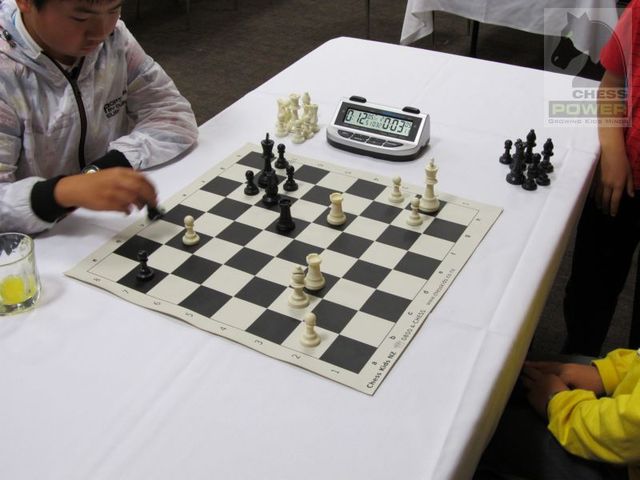 In this position Alphaeus is clearly better and he goes on to win a piece. 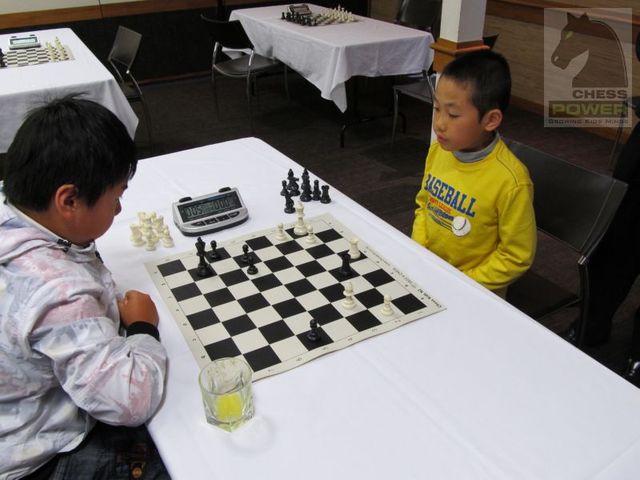 With enough time this position should be an easy win for Alphaeus. But being required to constantly play a move within 5 seconds in always going to be tough. In the game, Johnson created a passed pawn on f3 by playing h5, f4, g4 and f3. Alphaeus had to allow the pawn move to f2 and needed to play Bc4 to maintain winning chances. Unfortunately Alphaeus played Bb3 allowing Johnson to queen the pawn and win the game a few moves later. An upsetting outsome for Alphaeus after a lot of effort to produce a winning game.

Throughout the whole tournament Alphaeus struggled to manage his time often finishing games with less than 30 seconds on the clock. It is very difficult to maintain your composure with this much pressure.

In another upset, Rohan Patel beat Kumaa Jayachanthiran. This was a clear signal that anybody can win when there is so much talent in the room.

In Round 3 William Zhang overcame Johnson Chen. Kumaa resettled winning against Daniel Gong. And Derek Zhang beat Leo Zhang. At this point William and Derek led the points table to 2.5. Alphaeus, Johnson and Allen were close on their tails with 2.0.

In Round 4 on the top board, William Zhang was drawn against Alphaeus Ang.The following position was reached out of the opening. 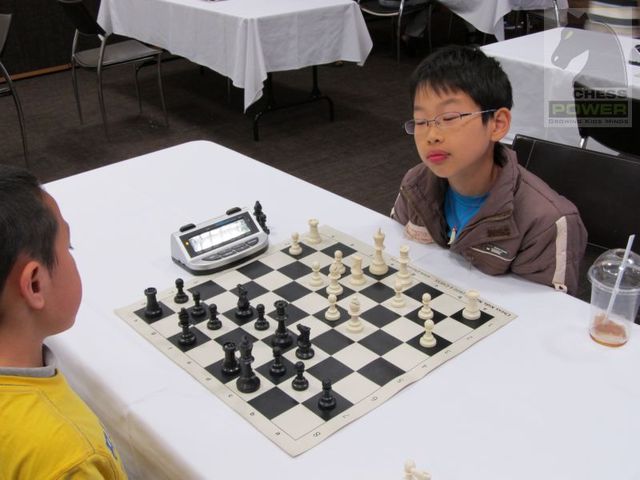 I am fascinated by opening positions as this is often where one player can set an advantage for the rest of the game. 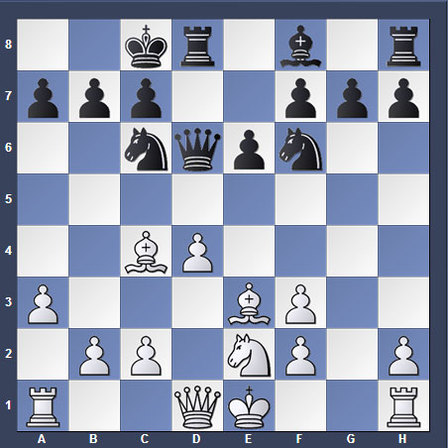 I felt Black had the advantage here due to his lead in development and White's doubled f-pawns being a weakness. It is tempting to play e5 taking advantage of white's king in the centre. This is what Alphaeus ended up playing. However, it is dangerous for Black, as if White manages to get his King to safety, Black with have opened the position up for White's two bishops.

If think a good plan is to weaken white's light squares by trying to get White's white-squared bishop whilst taking advantage of the weak f3 pawn to gain some tempo. 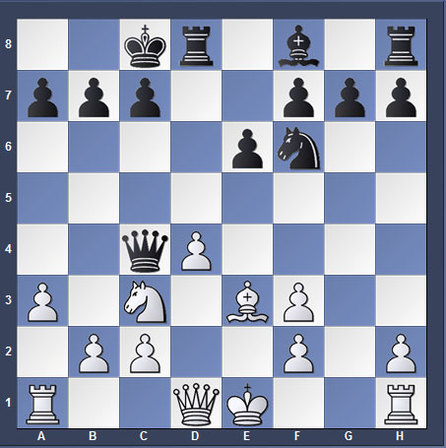 Round 4 - Zhang vs Ang (possible continuation)

Rohan Patel managed to secure another win against Michael McKenzie. And Johnson Chen overcame Leo Zhang showing he was on form for this tournament.

Round 5 matched Allen Fan against William Zhang on board 1. This was always going to be a close battle. Allen played brilliantly to find himself in an end-game with a Queen vs Williams' Rook and Bishop. Earlier in the game Allen could have captured Williams' hanging bishop on f6 with his Queen securing a likely win. Instead the pressure of playing against his formidable opponent saw Allen play the intermezzo Qf7+ allowing William to save his bishop with Bg7.

William had a difficult task to build a fortress to have any hope of saving the game. 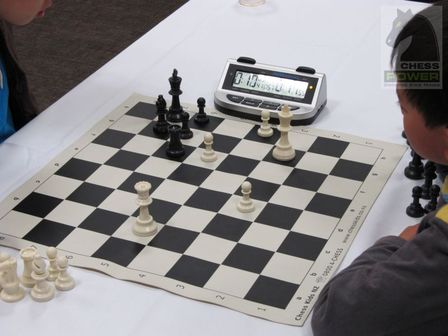 In this position Allen found some inspiration by playing f5 which Black countered with Rf6. How should White continue? Allen found a very interesting solution!

The problem White has is it is difficult to find an active square for White's king. But more importantly it is extremely difficult to mobilize the d3 pawn. White solved both problems by playing 1.h5! 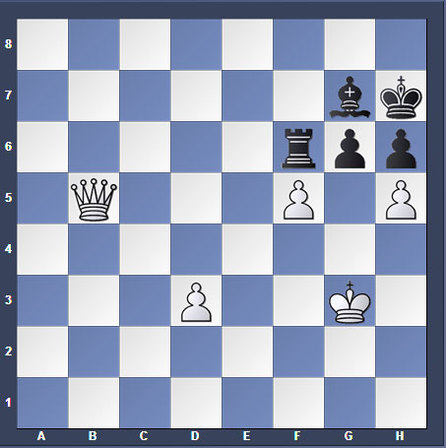 The point of the move is the tempting 1...Rxf5 exposes Blacks King after 2.hg+ Kxg6 3.Qe8+ when Black cannot return to safety with 3...Kh7 because of 4.Qe4 picking up the rook. So Black would have to come out with 3...Kg6 but then 4.Qd8+ Kg6 allows white to finally mobilise his pawn with 5.d4. Black still has resources but White has managed to improve his position here.

So William preferred 1...gf but then Allen calmly played 2.Kf4. Now Black always has to keep an eye on the f5 pawn and White is free to push the d3 pawn at the right moment. 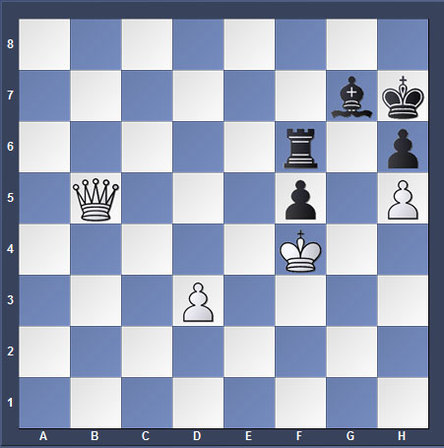 After a few more moves however William managed to again secure the d4 square to a point that Allen couldn't make any further progress. A draw was then agreed. William (Houdini) Zhang managed a lucky escape.

Round 6 saw William overcome Rohan after a tactical blunder in the opening. Allen Fan, probably from exhaustion in his game against William in the previous round ended up two pieces down against Johnson Chen.

And Rodney Li finally got some joy winning against Daniel Gong.

After Round 6,William Zhang had a healthy lead with 5 point followed closely by Derek Zhang on 4.5 and Johnson Chen on 4.0.

However, as Round 7 was drawn it was up to Leo Zhang to attempt to overcome William. And Kumaa was paired against Derek Zhang. So if Leo could hold William to a draw and Derek won his game against Kumaa, Derek would have a 1st = opportunity. The tournament would have a different outcome in store.

Leo played the Sicilian Najdorf against William and game turned into an exciting battle with both players attacking each players king at the same time. This would have to be the game of the tournament so we have included here for your enjoyment.

The game between Derek and Kumaa was also very interesting. The following position arose where Kumaa found himself a piece up! 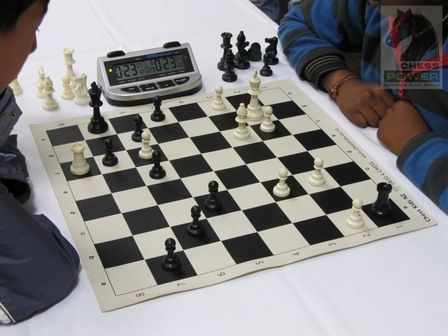 White can expect to win here but Black won't be without chances. The Black queenside pawns will get dangerous but White's f-pawn could become very threatening. After a few more moves the following position arose. 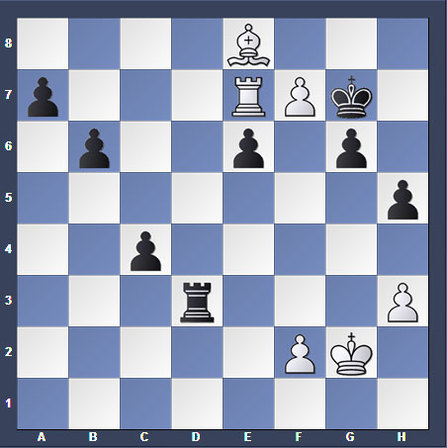 White to play and win

Kumaa ended up in the above position and had a crushing move. In the end he played Rxa7 and eventually won the game. Can you find the move that would win for White straight away?

So after all was said and done, William Zhang won clear first and won the Under 10 prize. William earned the title of MC Cup Champion and won the MC Cup. His name will be engraved on the MC Cup. William gained free entry into all MC Cup events for the following year and gained a $300 cash contribution to the Queenstown Classic. 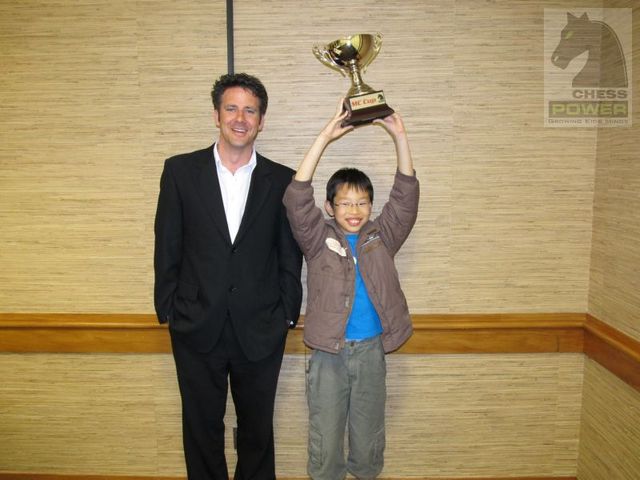