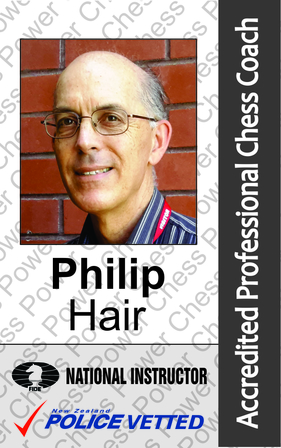 Philip is probably our most careful and deliberate coach. He takes his time and delivers with care and attention. This gives kids a great understanding of Chess without missing a beat.

Why do you love Chess?

Chess is an engrossing board game which requires imagination and visualisation skills. The game is strangely compelling and the challenge is to find what works in a given position, using experience, technique and creative ability.

When/how did you first learn to play?

I learned to play chess on my 13th birthday when a friend gave me a chess set as a birthday present. My initial chess activity consisted mainly of playing through games from library books rather than competing myself. It’s interesting that at this early stage the fascination of chess was able to overcome my complete lack of any understanding of the game.

Why do you enjoy working with kids?

I like working with kids because they are enthusiastic about chess and like to compete with each other. They attend the school chess sessions voluntarily, because they are already interested, so that provides a head start in giving chess tuition. I try to encourage further interest in chess by demonstrating tactical puzzles, instructive short games, and practical endgames; I also help out when they are playing their tournament games with each other by answering questions, usually about the rules.

Objectively, my main chess achievement was probably finishing 2nd in the Major Open (after Ben Giles) at the annual NZ chess congress in 2001. However, the achievement that sticks in my mind the most is winning three times in serious tournament play against Leonard McLaren, who is rated about 400 rating points higher than me and is now a FIDE master (I hope Leonard doesn’t mind my mentioning this).

How do you think Chess helps kids?

I think it helps kids to achieve a longer concentration span, and this counteracts the effect of technology (which reduces attention spans). The ability to concentrate and think clearly is important in educational achievement in any discipline. Also, having chess available in schools provides another competitive activity for kids to excel at, and this may be particularly important for those who are not so interested in physical sports.