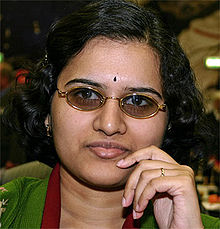 Humpy Koneru (born 31 March 1987 in Gudivada, Andhra Pradesh) is a chess grandmaster from India. Her January 2010 FIDE Elo rating is 2614, placing her number two in the world for women (behind Judit Polgár). In 2007 she surpassed the rating of 2577 set by Susan Polgar  to become the second-highest ranked female player in history. She became the second female player ever, after Judit Polgár, to exceed the 2600 Elo mark.

From 2002 through 2008, Humpy held the record as the youngest woman ever to become a grandmaster (not merely a Woman Grandmaster), which she achieved at the age of 15 years, 1 month, 27 days, beating Judit Polgár's previous mark by three months; however, this has since been surpassed by Hou Yifan.

In 2009, Humpy accused the All India Chess Federation of preventing her from participating in the 37th Chess Olympiad in Turin.  Her father Koneru Ashok who was coaching her was not allowed to travel with her for tournaments. The controversy has not died down. Later that year, the AICF was also embroiled in a controversy with Geetha Narayanan Gopal.