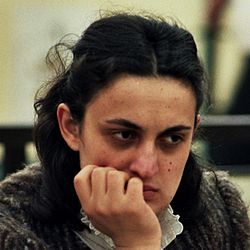 Maia Chiburdanidze (born January 17, 1961) is a Georgian chess grandmaster, and the seventh (and then youngest) Women's World Chess Champion. She is the only chess player in history who has won nine Chess Olympiads.

Chiburdanidze's FIDE Elo rating as of January 2011 is 2502, making her the 14th highest rated female player in the world.

Maia Chiburdanidze was born in Kutaisi, Georgian Soviet Socialist Republic, USSR and started playing chess around the age of eight. She became the USSR girls' champion in 1976 and a year later she won the women's title. In 1977 she was awarded the title of International Women's Grandmaster.

She won outright on her debut at the Braşov women's international tournament of 1974 when she was only 13 years old and went on to win another tournament in Tbilisi in 1975 before entering the women's world championship cycle of 1976/77.

Her style of play is solid, but aggressive and well grounded in classical principles; it was influenced by Eduard Gufeld, a top Soviet trainer, who was her coach early in her career.

Chiburdanidze finished 2nd in the Tbilisi Women's Interzonal (1976), thereby qualifying for the 1977 candidates matches. She advanced through to the Candidates Final, where she beat Alla Kushnir by 7½-6½ to set up a world title match in Pitsunda, Georgia, against Nona Gaprindashvili, the reigning women's world champion. Chiburdanidze defeated Gaprindashvili by 8½-6½.

She successfully defended her title four times. In 1981 she drew a tough match 8-8 against Nana Alexandria, in Borjomi/Tbilisi, but kept the title as Champion. Three years later she played Irina Levitina in Volgograd, Russia and won convincingly by 8½-5½. The next defense came against Elena Akhmilovskaya in Sofia in 1986, and Chiburdanidze won the match by 8½-5½. In 1988 she retained her title again by narrowly winning a match in Telavi, Georgia against Nana Ioseliani by 8½-7½.

She was awarded the grandmaster title in 1984. She was the second woman, after Gaprindashvili, to be awarded the title.

Xie Jun of China won the right to challenge for the world championship in February 1991. Chiburdanidze lost her crown to the young Chinese player in Manila by 8½-6½. Her reign was the third longest, at 14 years, behind only that of the first women's champion, Vera Menchik, who reigned for 17 years from 1927 until her death in 1944, and that of Gaprindashvili's 16 years.

She has attempted to regain the world title but, with the rise of the Chinese women and the formidable Polgár sisters, this has proved difficult and her best performance since 1991 has been 1st in the Tilburg Candidates tournament of 1994, losing the playoff to Zsuzsa Polgár by 5½-1½. Subsequently, despite not approving of the knockout format, she has entered the world championships of recent years. She reached the semi-finals in 2001, only to be knocked out by Zhu Chen of China, who went on to win the title. In 2004 she again reached the semi-finals where she lost to Antoaneta Stefanova who went on to win the title.

Chiburdanidze, like many of the top women players, is not too impressed with 'women's chess' in general and she prefers to play chess with men. She has played extensively in men's tournaments around the world and her best form was seen in the 1980s and early 1990s. She was 1st in tournaments in New Delhi (1984) and Banja Luka (1985) and in the next decade she finished 1st in Belgrade (1992), Vienna (1993) and in Lippstadt (1995).

She was a key member of the USSR team that dominated the women's Olympiads of the 1980s and, when Georgia achieved independence from the Soviet Union in 1990, she played board 1 for the new Georgian national team that won four gold medals, in 1992, 1994, 1996 and 2008.

She also played in the European Team Championships of 1997 when Georgia won the gold medal and in the 1st Europe v Asia Intercontinental rapidplay match which was held in Batumi (Georgia) in September 2001. Asia won the women's section by 21½-10½ with Maia contributing 3½. In 2008 Drezden Olympiad, she played on board 1, for Georgia, that won the gold medal (1st place), and she also won gold medal for best performance (2715 pt).

She has been honoured many times by her country and several postage stamps have even been designed to celebrate her chess achievements. Mongolia issued a commemorative stamp in 1986 which illustrates a position in one of her games from the 1984 world championship match against Irina Levitina.

Maia Chiburdanidze is one of several women from the country who have excelled at the highest levels of chess. She has helped to further boost the standing of the game in her country, where she, and the other top Georgian women, are fêted like film stars.