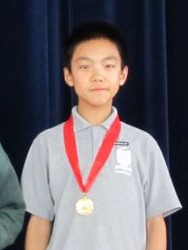 Daniel gained his Junior Master title by achieving a perfect 9 out of 9 score at the Chess Power Teams National Finals 2015. Daniel has since gone on to be one of the strongest chess players in New Zealand and as of August 2018 is ranked #18 in the country. The photo was taken at the Central Auckland regionals 2014 where Daniel's Mt Roskill Intermediate team won the event beating a number of senior teams.